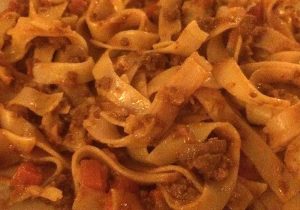 When is a Bolognese not a Bolognese – when it’s a Neapolitan Ragu…
This can be confusing, so let’s look at the facts – and most of us go wrong here as the term Bolognese  has been misused and misinterpreted to a great degree.
So what’s the difference and why bother I hear you saying – well try proper Bolognese sauce, properly known as ragù alla bolognese  and taste the difference…
The devil is in the detail with this one – so stay with it…

What we tend to call a Bolognese – as in spag bol – is really a Neapolitan ragù – is one of the two most famous varieties of meat sauces called a ragù. (Ragu meaning a sauce typically made with minced meat, onions, tomato puree, and red wine, and served with pasta.)
It is a specialty of Naples, as its name indicates and NOT Bologna.
The Neapolitan type is made from three main parts: a soffritto (defined below), meat, and tomato sauce (tin tomatoes or pasatta).
However, a major difference is more tomato sauce is used and often the proper Neapolitan versions use whole meat (not minced), cooking it in the casserole. Also, the Neapolitan soffritto contains much more onion.
It’s regional – the region around Naples is rich in tomatoes and so they use a lot – the region to the north Bologna is not – so they use very little…
Preferences for ingredients also differ. In Naples they use  red wine, butter or lard or olive oil, and lots of basil leaves are used or herbs. In the Neapolitan recipe, the content may well be enriched by adding raisins, pine nuts, and involtini with different fillings – and lots of tomatoes.

An actual real Bolognese sauce, known in Italian as ragù alla bolognese ,  ragù bolognese or just ragu is a meat-based sauce originating from Bologna, Italy, hence the name.
It is customarily used to dress “tagliatelle al ragù“. Usually served with tagliatelle, it can also be used with other broad, flat pasta, such as pappardelle or fettuccine.
Genuine ragù alla bolognese is a slowly cooked sauce, and its preparation involves several techniques, including sweating.
Ingredients include a characteristic soffritto of onion, celery and carrot, different types of minced or finely chopped beef, often alongside small amounts of fatty pork.
White wine, milk, and a small amount of tomato concentrate or tomatoes are added, and the dish is then gently simmered at length to produce a thick creamy sauce.
It’s a totally different taste to what we call bolognese.

The main differences between the two are –

in Bolognese sauce or  ragù alla bolognese –  originates in Bologna and uses milk or cream, white wine, no herbs are added and use of a minimal amount of tomatoes (usually tomato puree) – a larger amount of minced meat is used and can contain minced pork.

What we mistakenly call Bolognese is actually Neapolitan Ragus… and what’s more they are never served with spaghetti (it’s the wrong pasts for a ragu)
Usually served with tagliatelle, pappardelle or fettuccine.

So why bother – well the 2 sauces are very very different and i think it’s worth tying the real Bolognese originated in Bologna, to taste the difference…

Soffritto – A holy trinity in cooking is simply a combination of three aromatic ingredients, whether they are vegetables, herbs or spices, that are gently sauteed together to provide a flavour base for other ingredients to build upon. These ingredients are usually cooked in either butter or olive oil to release their flavors and are used commonly when creating soups, sauces, stews, or braises.
In Italian cuisine, this holy trinity is also called a “soffritto”, “odori”, or “battuto” and usually include onions, celery, and carrots in a 2:1:1 ratio which in France is called mirepoix.
In most of Italy this soffritto is gently sauteed in olive oil, although in some northern Italian regions such as Lombardy or Veneto, butter may be used as well.

Neither have oxo cubes or marmaite added – you don’t need them at all – it changes the flavour totally.

Why take my word for it –

Filippo Trapella was born and raised in Bologna, Italy (also the hometown of lasagna and tortellini), Filippo grew up under his grandmother’s table, helping her make fresh pasta for family feasts. See his recipe here…

Olive oil
Garlic – 2 /3 cloves finely chopped
Soffritto = Medium Carrot, Onion and 2 /3 sticks of celery and very finely chopped
2 or 3 tablespoons of tomato puree – note no tins of tomatoes or passata.
400g minced beef – or you can use veal, beef, lamb, pork,  or a mix pf beef and pork
Glass of red wine – 175ml – or white wine
Parmesan 150g
Pinch of nutmeg – optional – but it works
Milk – amount according to requirements

Tagliatelle or fettuccine – but not spaghetti (unless you want to ). It sticks to the wider pasta far better. Spag Bol is a British invention, not Itallian…

Now the odd bit -but it works…
Add about half a pint of milk to it and move to a very low heat for 30 mins (check for drying out add more milk if it does)
Then repeat the above a minimum of another 2 times – making it cooked for 2 hours – 1 1/2 on a very low heat… but it can be cooked for 4 hours
The use of milk in Italian cooking is common – even though it may seem odd to us – but it adds a rich creamy depth to a sauce…and helps to tenderise the meat.

It needs to be a very thick creamy sauce – reduce a little if it isn’t. 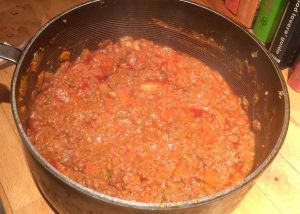 Serve with Tagliatelle or fettuccine – but not spaghetti (unless you want to of course).
Mix it into the pasta and grate the Parmesan over – season to taste.

Just a note – it can also be made using white wine and by adding the milk at the start with the mince… but it prefer the above method and using red wine – it gives a far creamier sauce and depth of flavour in the end.